Instant (or soluble) coffee has been widely used for decades because of its convenience. During the height of its popularity in the 1970s, nearly a third of the roasted coffee imported into the United States was converted into an instant product, resulting in annual sales of more than 200 million pounds. Today, about 15% of the coffee consumed in the United States is prepared by mixing instant granules with hot water, either at home, in offices, or in vending machines. Furthermore, development of good quality instant products has helped popularize coffee in cultures that historically drank tea.

Since its invention, researchers have sought to improve instant coffee in a variety of ways. For example, some of the early powdered versions did not dissolve easily in water, leaving clumps of damp powder floating in the cup. Coffee aroma dissipates easily, and manufacturers have tried to develop treatments that will make a jar of instant coffee smell like freshly ground coffee when it is opened. More modern manufacturing processes make instant coffee granules that look more like ground coffee. Finally, a major goal has been to produce an instant coffee that tastes as much as possible like the freshly brewed beverage.

The primary advantage of instant coffee is that it allows the customer to make coffee without any equipment other than a cup and stirrer, as quickly as he or she can heat water. Market researchers have also found that consumers like making coffee without having to discard any damp grounds. Some coffee drinkers have become so used to drinking instant coffee that at least one manufacturer found in taste tests that their target audience did not even know what fresh-brewed coffee tastes like.

The desire to make coffee instantly by simply mixing a liquid or dry concentrate with hot water goes back hundreds of years. The earliest documented version of instant coffee was developed in Britain in 1771. The first American product was developed in 1853, and an experimental version (in cake form) was field tested during the Civil War. In 1901, the first successful technique for manufacturing a stable powdered product was invented in Japan by Sartori Kato, who used a process he had developed for making instant tea. Five years later, George Constant Washington, a British chemist living in Guatemala, developed the firqt commercially successful process for making instant coffee.

Washington’s invention, marketed as “Red E Coffee,” dominated the instant coffee market in the United States for 30 years, beginning around 1910. During the 1930s, the Brazilian coffee industry encouraged research on instant coffee as a way of preserving their excess coffee production. The Nestlé company worked on this effort and began manufacturing Nescafé in 1938, using a process of co-drying coffee extract along with an equal amount of soluble carbohydrate. Instant coffee was enormously popular with American soldiers during World War II; one year, the entire production from the U.S. Nescafé plant (in excess of one million cases) went solely to the military. 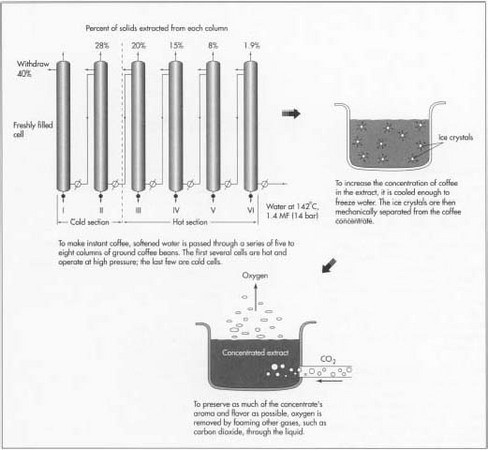 By 1950, Borden researchers had devised methods for making pure coffee extract without the additional carbohydrate component. This improvement boosted instant coffee use from one out of every 16 cups of coffee consumed domestically in 1946 to one out of every four cups in 1954. In 1963, Maxwell House began marketing freeze-dried granules, which reconstituted into a beverage that tasted more like freshly brewed coffee. During the next five years, all of the major manufacturers introduced freeze-dried versions, and by the mid-1980s, 40% of the instant coffee used in the United States was freeze dried.

Two of the 50 known species of coffee beans dominate the beverage coffee industry. Coffee arabica varieties, grown primarily in Latin America, India, and Indonesia, are relatively mild in flavor and, consequently, bring a higher price. They are also relatively expensive to harvest, since individual coffee cherries must be hand picked at their peak of ripeness. Coffee robusta varieties, grown mainly in Africa, India, and Indonesia, have a harsher flavor, but they are cheaper to grow since they can be harvested over a range of ripeness and are more resistant to diseases and insects. Because of their more attractive price, the robustas are widely used in the manufacture of instant coffees.

Roasting at temperatures above 300°F (180°C) drives the moisture out of coffee beans. Beans destined for use in instant products are roasted in the same way as beans destined for home brewing, although the moisture content may be left slightly higher (about 7-10%). The beans are then ground coarsely to minimize fine particles that could impede the flow of water through the industrial brewing system.

Two basic methods are available for converting the liquid coffee extract to a dry form. Spray drying is done at a higher temperature, which affects the taste of the final product, but it is less costly than freeze drying.

basically involves rewetting the surfaces of the coffee powder particles and bringing the particles into contact, so that they will adhere to each other and form larger, more granular particles. This is accomplished by exposing the powder to steam or a fine mist, while tumbling it in the air.

Spent coffee grounds from the brewing process are the primary waste product. At least one manufacturer burns these grounds to heat water and generate steam that is used in the manufacturing process. The process is designed to be environmentally friendly, minimizing waste products by maximizing the use of the raw materials.